Bridging the gap from high school to college and career

We work with communities to create opportunities that lead to postsecondary success for all students. We foster innovative, sustainable, and scalable structures that bridge high school to college and career so students can get the head start and success they need even before they graduate high school. 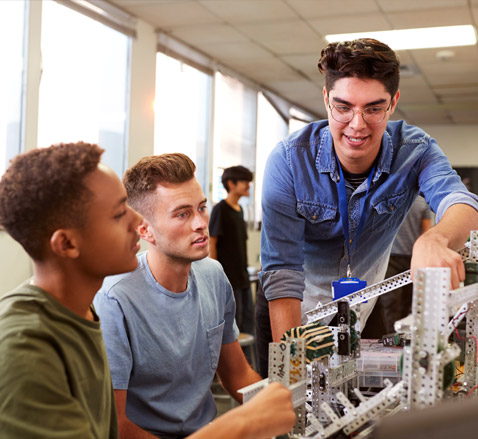 Early College programs offer high school students the opportunity to take strategically sequenced, real college classes with strong career orientations during their regular high school day, at no cost to themselves or their families.

Massachusetts Early College graduates are 50% more likely to persist in college for 2+ semesters, compared to their peers.

A randomized control trial found that 25% of Early College students earned a postsecondary degree four years after high school graduation compared to 5% of their matched peers.

Research estimates that the impact of Early College High Schools results in a 15:1 benefit to cost ratio.

We build bridges between the traditional silos of high school and postsecondary education to transform students’ college and career readiness to college and career success. By redesigning their current pathways, high schools can offer students significant access to college credits as well as industry recognized certificates, and bolster students’ postsecondary confidence, leading to better opportunities for students, especially low-income students of color and first-generation college students.

At the state level, we create support for the Early College model by partnering with state leaders and building statewide coalitions. At the district and school levels, we seed innovative ideas, garner necessary support from key stakeholders, and provide technical assistance for Early College and Early College Promise programs.

We have also pioneered the Early College Promise program where existing Early College programs adopt a fifth year approach. With Early College Promise, participating students have the opportunity to forego the right to graduate from high school in 12th Grade and instead enjoy one more year of strong financial and human support to advance their college attainment. Participating schools commit to re-engineering their programs and recruiting rising 11th graders to a three-year program, including this added “13th grade,” whereby they can pursue a full Associate’s degree and/or two years of transferable credit to take to a four-year college.

Our Work So Far

Massachusetts Early College By the Numbers

“Early College made me hopeful for my future. As someone who is from a low-income family, money is what worried me the most when thinking about college. Throughout middle school and the beginning of high school, I worried that I would have to set my dream aside (for a while) and focus on working, but now because of Early College, I know that my dreams can come true and that I wouldn’t have to set them aside or put them on hold.”

Learn more about what others are saying.